In a series of seven blogs, we briefly discussed each source of waste of the lean manufacturing or Muda (無駄, a Japanese word meaning “wastefulness; uselessness”) methodologies, namely: defects, inventory, overproduction, overprocessing, transport, waiting and motion.

Their direct and indirect causes and associated costs were presented in a non-exhaustive manner and sometimes some examples of the impact of these sources of waste on the health and safety of workers were given.

In this final blog on lean manufacturing, we will try not only to better clarify the link between the sources of waste and health and safety problems, but also to explain the “equivalence” relationship that often exists between an improvement action initiated out of concern for safety and another initiated out of concern for improving performance.

Actions taken to improve or resolve a safety-related issue are often (not always, but often) motivated by internal or external regulatory requirements (e.g., unions, occupational health and safety authorities and regulations, etc.), and this is one of the main reasons why any safety improvement is first seen as a counterproductive measure that does not generate profit or create added value and can even negatively impact production performance). Over time, it has become difficult to put in place measure or design solutions that allow both to improve safety and performance. By not considering safety constraints as a factor in an action initiated by motivations for an improvement in performance, but rather by considering them as an action that makes it possible to improve the level of safety and also to reach the same level of performance that would be desired out of a modification for performance improvement purposes. In other words, it is necessary to believe in “improvement through safety”.

Improvement through safety is not an invention or a concept that will result in a major change in one’s ways of doing or thinking. It only takes a slight change in perspective because it is already how we usually do things, without realizing it.

As an example, consider a safety problem caused by pedestrian-forklift cohabitation where the risk of collision is high. At first glance, this is a safety problem for which there are several possible solutions to choose from. Generally, a solution based on the total separation between safety and performance is adopted (e.g., procedures, traffic bans, speed limits, surveillance, etc.). However, if we aim to resolve the problem within the framework of intrinsic prevention (which usually requires a little more thought), we find ourselves thinking about how transport operations can be eliminated or reduced which represents a more effective solution. Moreover, and without realizing it, we are also in the process of solving a waste problem related to transport where the positive effect for performance is undeniable and presents the same result as would be brought by the correction of a performance problem where we act on the waste due to transport.

Below is a table that presents example of safety issues caused directly or indirectly by the sources of waste found in Muda. 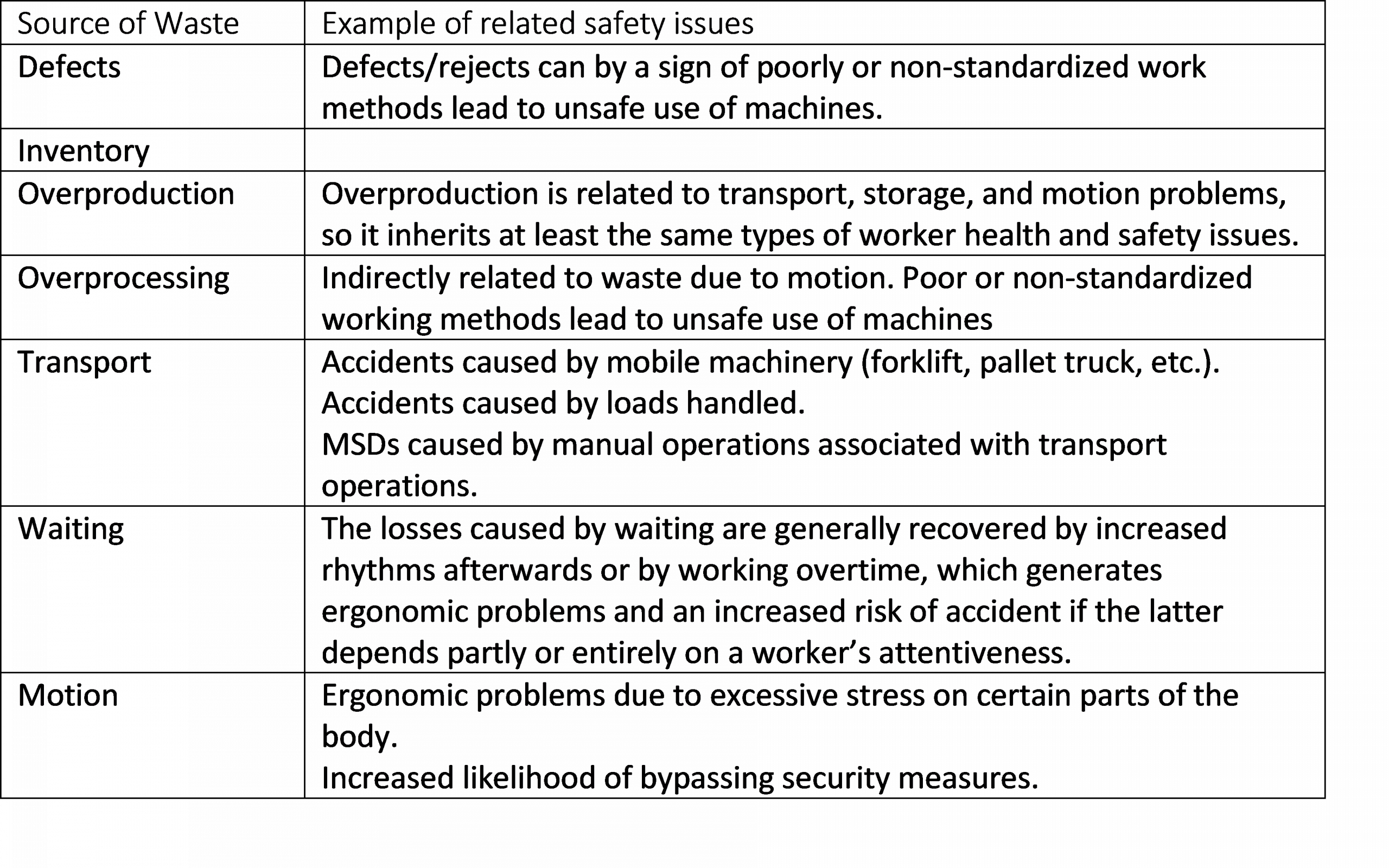