electric arc. Under normal operating conditions, enclosed energized equipment that has been properly installed and maintained is not likely to pose an arc flash hazard. Thus, if the equipment is inherently safe (enclosed, properly installed and maintained), no protection is required according to the standard. This definition is based on the 2nd point of the table 4A where a low voltage disconnecting maneuver is treated.

The table 4A of the standard treats the question of PPE in electrical safety context, according to the task and the equipment condition. The table describes the safe disconnecting maneuver steps as follow:

The figure realized by Intervention Prevention Inc. shows a good example of how to perform a safe disconnecting maneuver. 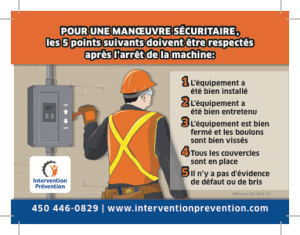 In the next version of the CSA Z462 standard, a sixth point will be probably added. That is to say following the manufacturer instruction in particular, when the equipment is relatively complex whose the manipulation could lead to a hazardous situation such as transfer switch, multi-source, etc.