The 2018 version of NFPA 70E standard (and probably the future version the CSA Z462 standard) is characterized by an integration with the risk analysis process, a pyramid describing the periodization of corrective actions is illustrated on the main page of this new version (fig1). The first step of the process consists of trying to eliminate, at the source, the danger, if the residual risk is not tolerable, then it should be managed by substitution and engineering controls actions, finally, administrative controls tools, awareness and PPE are considered as last resort risk reduction measures. The risk analysis approach adopted by the new version of the NFPA 70E standard fits perfectly with Quebec ROHS and the CNESST lockout guide logic (ROHS 188.1-188.13). Equivalent to an access to machine danger zone, tasks on electrical installation should be performed after locking out the equipment, however, if a lockout procedure is impractical then, a risk analysis should be undertaken to reduce and evaluate the risk. 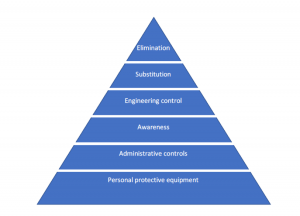 To date, the 2018 version of the CSA Z426 standards is not published yet, however, links will be made with the NFPA 70E standard, because the Canadian electrical safety standard have always been based on the American standard. In this blog, only the main changes will be treated

The definition of arc flash hazard has been refined and the link to the table 130.5 (4A in the CSA Z462 standard) is confirmed again. To determine when arc flash PPE are needed, the table allows to draw a line if the equipment has been well maintained and well installed, but instead of talking about the required anti-arc flash PPE, it focused on the probability that an arc flash occurs (risk analysis). The table has been simplified and is now in single page. The concept of safe maneuver (with the 5 points) was maintained but a 6th point about operating the equipment according to the manufacturer instructions was added, especially when the equipment is complex (ex: transfer switch). The definition of electrical safety has been revised to have an approach more focused on the risk analysis. The electrical shock is better defined in this version and it will be subject to another blog.

The CPR/AED training is still in effect but the re-certification requirements vary according to the country, state and region, however an annual review is required anyway.

The term (repair) has been added, to say that if the extension has been repaired, then it has to be replaced, because several accidents occurred during a reparation of extensions that were already in bad condition.

Steps to an Electrically Safe Work

Two additional points have been added to the existing 5 points, the 2 points consist of releasing stored electrical energy (ex: capacitors in motor drives) and releasing or blocking the stored mechanical energy, the residual hazardous energy is more considered than the previous version of the standard.

The threshold was set at 50Vac and 100Vdc, beyond this value, unqualified persons should remain out of the limited space and have not to perform tasks that could exposed them to conductors.

They are similar to tables 1A and 1B of the CSA Z462 standard, they have not undergone any changes about the limited and the restricted spaces, for the shock hazard.

Incident energy is still a major part of the standard, but maintenance notion is reinforced. The review of coordination and short-circuit calculations every 5 years following the study or when there is major changes at the building level is still required.

(The table 4A in the CSA Z462 standard), the table 130.5 has been simplified and tasks have been classified according to the condition of the equipment and the probability that an arc flash occurs instead of saying that PPE is not needed directly, for instance, it is unlikely that an arc flash occurs when checking an indicator value on an electrical panel screen regardless of the condition of the equipment. The table has been adjusted according to the standard risk analysis guideline, at the end of the table, points concerning normal condition equipment has been defined (same points previously discussed in the safe maneuver blog) and additional points about the manufacturer recommendations has been added.

The application of cal/cm2 only, instead of arc flash PPE categories has been moved from the annex to the content of the standard. In summary, it is only the cal/cm2 that are taken into account and now single layer clothing can protect against incident energy up to 12 cal/cm2 if they are a rate at 12 cal/cm2 (including all the PPE like the balaclava and faceshield rate at 12 cal/cm2 too). There are 2 kits, one with a minimum of 12 cal/cm2 and another with a minimum of 40 cal/cm2. Therefore, when the energy level is less than 12 cal/cm2 on the label, the worker must take the set with minimum 12 cal/cm2 and when the energy level is greater than 12 cal/cm2, he must wear the 40 cal/cm2. This method may be preferable for companies whose categories are difficult to apply. For instance, if the calculated incident energy level is 10 cal/cm2, category 4 clothing (40 cal/cm2) should be worn according to the category method (1 to 4) and it will be the same set as category 2 but at 12 cal/cm2 if only the energy levels method is applied.

The list of requirements is practically the same however, the company must choose between the category method or incident energy level method (not both simultaneously) to avoid any misunderstanding of the workers.

In conclusion, the new version of the NFPA 70E standard has strengthened its vision of integrating risk analysis into decision-making process in the electrical safety management, which is more consistent with occupational health and safety standards. This transition involves reducing the risk for companies by having first and foremost well-installed, well-maintained electrical equipment and following manufacturers’ requirements to reduce the risk of an electrical workplace incident.